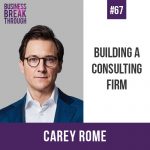 While still in high school, Carey Rome decided that he wanted to own his own business. Seeing that, his Dad told him to go and speak to his uncle who told him the following: It doesn’t matter if you’re doing really well or you’re doing really poorly. If you have to have someone tell you, your business is at risk.

From there, Carey ended up working at the largest CPA and advisory firm in the world at the time before opening up his own firm in 2005. In this episode, Carey shares the ups and downs of going out on his own, plus his struggle of developing an MVP which ended up being his biggest business success- and biggest headache.