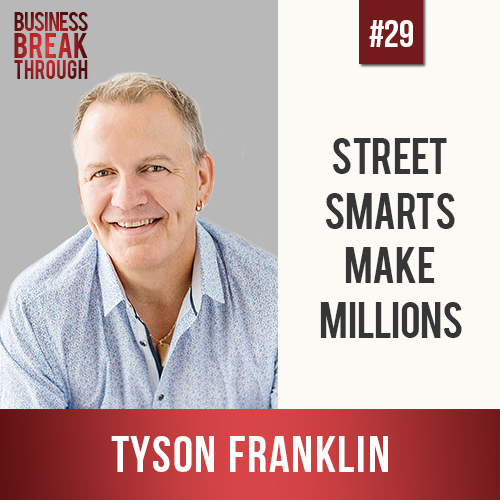 From stolen merchandise to a podiatry franchise, Tyson takes us on a ride that is as informative as it is compelling. In this episode you get to listen to a true business genius, who can turn anything into a profitable enterprise. We hear about Tyson’s incredible business journey starting when he was just 12 and working as a “fence” in Elementary School to building his own Podiatry empire across Australia, and then cutting it down to one location to be even more profitable. The wisdom in this episode will give you immediate tangible business growth, as well as make you laugh.

Tyson E. Franklin graduated from the Queensland Institute of Technology, Brisbane, Australia in 1988 with a passion for business and marketing. Strangely he didn’t study business or marketing at QUT, instead he studied podiatry, however the following year he did enroll in a business degree at Griffith University, Gold Coast Campus.

Since then he has opened, sold, taken over and relocated well over 20 podiatry businesses throughout Queensland, and at one stage ran multiple podiatry and footwear businesses 1800km apart, proving great systems must come first and then a great business will follow.

Someone will always discourage you when you are starting out, but they can be wrong. Never let one person stop you from following your dream.
When you open a new business, you don’t need to go all in. Retaining your day job until your business takes off fully gives you more security, and freedom to build business without grabbing mediocre opportunities out of desperation for cash.
Take every opportunity you get to learn another skill because you never know when you can use it.
Six steps to real business expansion plans:
1. Write down what you earned last year.
2. Write down what you want to earn this year.
3. Write down all the things you need to do differently so that you can make that goal happen.
4. Now write a zero on the figure you want to earn.
5. Write down how are you going to make that happen.
6. If it seems impossible, imagine that if every person you ever loved in your life will be killed if you don’t reach that goal. Is it now possible?
Tyson increased his fees by 20-30% and the only person who was uncomfortable was himself. When you price yourself higher, you upgrade your brand and the people you attract will be different.
You don’t need to offer full service for everything you go into. Look at the products and services that you provide and find out which ones earn you the most money. Focus only on those things.
Before Tyson opened his new clinic in Cairns he went into every coffee shop and introduced himself and his soon-opening business. This created a huge buzz and his clinic’s grand opening was featured in newspapers and the local radio. He was booked out before he opened his doors.

“People with integrity, expect to be believed. If not, let time prove them right.”