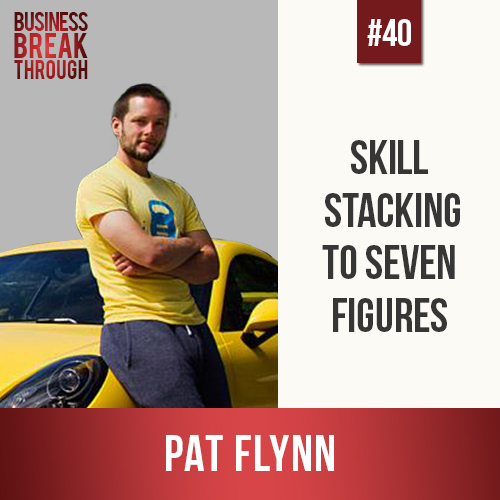 Pat Flynn takes on the generalist approach in an increasingly “niche” world and explains why skill stacking – combining many diverse skills into one unique whole – is a better and more realistic approach. In this approach, it’s ok to get bored of just one interest and it’s also ok to not be the very best at any one thing.

As Pat gears up to make his mark and take generalism to the next level, who should he focus his new approach on so that it can have the biggest influence and turn into a real movement? Tune in to find out and join in!

Pat Flynn is great at many things, not the best at any one and not afraid to say so. Writer, entrepreneur, musician and fitness & meditation try-hard, Pat runs multiple six- and seven-figure businesses around his various interests and skills.

Focusing on the arts, writing, philosophy and music back in high school, Pat gained weight and wanted to fix that.
Went into martial arts, got hooked and delved in to get as much skill and knowledge of fitness as he could.
As he entered college, began a blog (now called Chronicles of Strength) which started attracting attention.
Realized that although he wasn’t the best fitness guy in the world, his writing skill could compensate for that and he could still attract people, which sowed the seeds for Generalism.
By 2008 Pat had a substantial audience and, wanting to turn them into customers, hired a coach who taught him about copywriting.
Sold his first e-book using email marketing which brought in small cash, but he was blown away by the idea that he could bring in money by combining his various skills.
From there he created various online information businesses including a membership site – Strong On, and higher-end, more expensive services – coaching, group coaching, one-off fitness challenges and various courses in addition to classes and courses in his physical studio.

Skill-stacking is more powerful and more rewarding than specialization. In today’s world, you are better off being good to great, or at least fairly competent, in a few skills. You can then combine those skills to bring something unique to the world.

Better to be different than better.

There is a difference between having a lot of random skills and disparate interests, to having a connected skill set and a core brand that connects all your different aspects. Skill-stacking is about building a set of diverse skills that you combine to create one unique whole.

A good generalist is a short-term specialist. If you want to get good at something, go totally into it until you have become good at it. Then you get bored and can move onto the next thing.

The importance of a good coach cannot be underestimated, for at least two good reasons:

Pat wants to make his mark on the world and turn his idea of Generalism into a movement, but he is not sure where to go with it. Where, how and to whom should Pat be bringing his ideas to get people to think in a different way and be seriously influenced by Generalism?

In order to make a movement, Pat needs three things:

Therefore, the best place to take his movement is to college students. Pat is already convinced that college does not teach in the right way. Many graduates know nothing about how to actually work in the area of their study, much akin to someone with a degree in Jazz guitar music who doesn’t know how to play the guitar. Bringing Generalism to college students can change their mindset for when they do go out to work, influencing the next generation of entrepreneurs in a meaningful way.

Don’t let perfection be the enemy of good.
If writing is thinking on paper, copywriting is selling on paper.
Satisfaction is reality minus expectation. [Estie Quote]
Discipline the desires to make the good at first accessible, then effortless.