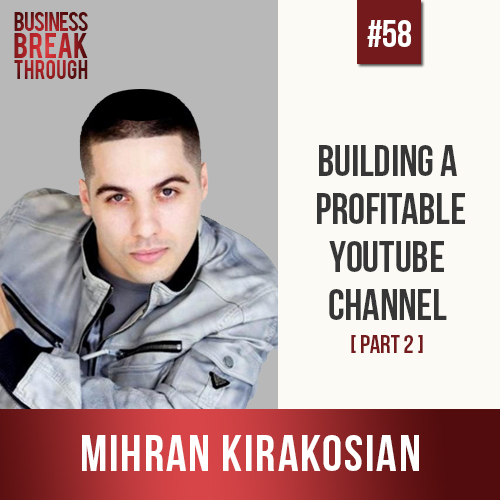 Mihran Kirakosian is a dancer-choreographer who has danced with some of the world’s biggest names like Britney Spears,  Madonna and Ricky Martin.
In this episode, Mihran, whose YouTube channel- MihranTV, has over 1.5 million subscribers, shares how you can make money on YouTube, but also the pitfalls to be aware of and how you can invest in creating the best videos, that receive millions of views without ever bringing in a cent of ad revenue to your pocket.

Mihran Kirakosian is widely known for his extensive work with Britney Spears, Madonna, Ricky Martin, and many more. In addition, Mihran served as an assistant choreographer/artistic director for NBC’s popular show “The Voice.” Mihran has built a brand that consists of his own YouTube channel. As the content creator of “MihranTV,” his hugely popular YouTube channel is subscribed to by over 1.5 million fans worldwide.
In March of 2019, Mihran opened the doors of his own production company/dance studio “Mihran K. Studios”,  located in Burbank, CA.

Grew up in Armenia where his Dad was a dance choreographer.
When the Soviet Union collapsed and Armenia became its own country, his parents sold their house for seven plane tickets and moved out to the USA.
Moved in with his uncle for 6 months until his Dad opened his own dancing and choreography studio, where Mihran learned dance and choreography.
Joined an after-school activity class that focused on drama, acting and dancing, which ignited his passion to become a professional dancer.
Started getting involved in more classes, doing some commercials at the age of 16.
Auditioned to dance with Britney Spears and got in, so dropped out of school and focused all his energy on his dancing career.
After dancing with Britney, he went on to dance with other huge celebrities like Madonna and Ricky Martin.
Saw a transition in the entertainment business where amateur dancers were getting more credit and success publishing YouTube videos, than professional dancers were getting from commercials.
Already had a YouTube channel with about 25,000 subscribers, but in April 2016, decided to focus fully on developing his channel, publishing consistent videos and dance tutorials
Currently, Mihran is focusing on his brand-new dance studio, which he opened last month, while simultaneously building his YouTube channel to maximize it for monetization.

Sink or Swim
If you have a Plan B, how full are you going to go out for Plan A? Putting yourself in a “sink or swim” position, forces you to figure out how to swim. And if you really want it badly enough, you will figure it out.
Monetizing YouTube
There are two main ways to make money out of YouTube:
Method One: Ad Revenue
If you own the full content of your om YouTube in terms of visual and audio, you can run ads on them and make money. However, it’s important to keep the following in mind:
Method Two: Branding Your Channel
You can use your YouTube channel to communicate your brand and everything you want it to represent to your target audience. You can make money from this type of monetization in the following ways:
Content Creation
Here are two important tips to keep in mind when creating content for YouTube:
Becoming a YouTuber

Many kids today dream of becoming a YouTube star. Although it’s not easy, it is possible, and using the following two tips could make it a lot easier:

Mihran struggles with a lack of time. He currently has huge opportunities of monetization waiting for him on YouTube, but he literally doesn’t have the time to spend on his channel because he is in the middle of building and opening a brand new studio. Mihran already had built up his YouTube channel to millions of subscribers using organic methods, so he can definitely bring in plenty more using non-organic methods. But, opening his studio and taking care of all the technical details, hiccups and bumps that are always a part of new ventures is taking up all his time, while the opportunity to monetize his videos and earn huge money on YouTube is lying idle, waiting for someone to take care of it.

Mihran needs to take on more help. Additional staffing, when hired and managed correctly either gives peace of mind or more money. In Mihran‘s situation, it will bring both. If he freed up time, he would make much more money out of his YouTube channel than he would spend on wages, making it highly worthwhile financially. Additionally, hiring people to take care of all the small, but important things that come up when opening his studio, will allow him peace of mind as well. Plus, once Mihran gets his YouTube channel rolling, chances are that it will literally explode!

For Part 1 of this episode, where you can hear Mihran’s journey, go to estierand.com/58-1.