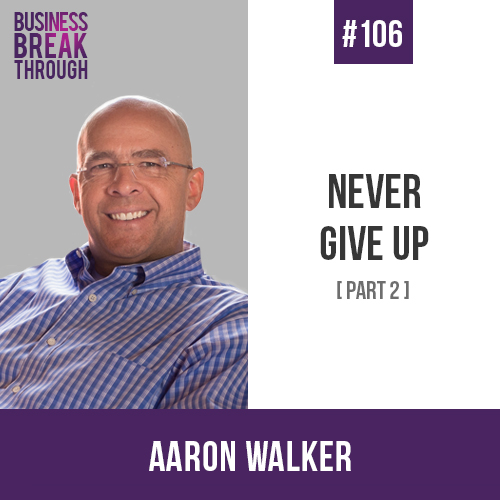 Life will give you many hurdles to building a successful business. If you want a relationship with your spouse and kids, don’t spend 18 hours of your day working. Most people spend 95% of their time chasing money, forgetting about their relationships, forgetting about what’s important. Or don’t dedicate the resources they need to make their business work, because they don’t believe enough in themselves.

Listen to this episode to get your head screwed on straight because there is nothing that you can’t achieve if you keep going for it.

Aaron Walker has founded more than a dozen companies over the past 41 years. He attributes much of his success to having surrounded himself with his mastermind counterparts. Aaron spent a decade meeting weekly with Dave Ramsey and other amazing entrepreneurs. Aaron is the founder of Iron Sharpens Iron Mastermind that now hosts 19 groups with national and international members. Aaron is the author of View From The Top and Mastermind blueprint. Also, the founder of The Mastermind Playbook an incredible resource for starting, running, and scaling masterminds.

Aaron lives in Nashville, Tennessee with his wife Robin of 40 years and he has two incredible daughters and five beautiful grandchildren.

·       When Aaron was 13 years old, he worked for a local pawn shop. He loved it. At age 15 he decided that was what he wanted to do for a living because he loved engaging people. So he graduated high school 2 years early.

·       After working so hard and for so long he became bored and depressed, put on lots of weight.

·       Aaron went back and started working for the guy he worked for when he was 13. He built the business and eventually became partners.

·       It was during that time that he met Dave Ramsey. He heard of him on one radio station. He advertised for a week, and 3 days in, people were pouring into their location buying their products.

·       It has now been 21 consecutive years and Aaron has been sponsoring his shows and it changed the whole company.

·       After being involved in a car accident, Aaron retired once again, this time for 5 years.

·       He then began coaching, and eventually ended up with the masterminds.

Aaron grew up with no money. Aaron broke out of the mental cycle of being poor because when he was growing up his mom was his big encourager. She had a saying “Can’t, couldn’t do it, and could, did it all.” This irritated him when he was young; however, he has adopted it as his life’s mantra. Today he believes that he can do anything.

With enough help, aid, trusted advisors determination and perseverance anyone can do anything they want.

In addition, Aaron discovered that his family have a memory but his business doesn’t. If you want a relationship with your spouse and kids, don’t spend 18 hours of your day working. Aaron made sure never to miss a practice, basketball game, a cheer leading, you name it! If his kids needed him he was there for them.

What got Aaron from A to B will not get him from B to C. He currently has 200 in his masterminds, he doesn’t want more than that. He therefore wants to duplicate it. He needs to build that out.

Another struggle he has is he is trying to delegate as many jobs as he can away from him. He only wants to do what he needs to do. However it is a challenge, because he wants to be involved in everything, but he can’t if he wants to scale. He needs to develop a level of trust.

“Fear missing an opportunity more than you fear failure.”

Part 1 of this episode where you hear more go to estierand.com/106-1