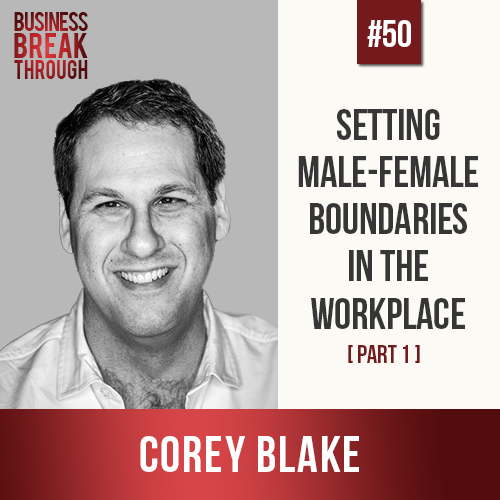 Corey Blake reveals the contents of that big black hole inside each one of us called vulnerability through the art of storytelling and writing. Through his journey from actor to producer to copywriter to now CEO of Round Table Companies, Corey has become an expert in helping people open up their deepest feelings and emotions and spill them out on paper. In this episode, Corey not only shares his incredibly moving and relatable story, but he also explains the law of vulnerability which takes people’s weakest points and turns them into literal works of art.

Corey is the publisher of Conscious Capitalism Press, the founder and CEO of Round Table Companies (RTC), and a speaker, artist, and storyteller. He previously starred in one of the 50 greatest Superbowl commercials of all time (Mountain Dew, Bohemian Rhapsody), has won 15 independent publishing awards, and has been featured on the cover of the Wall Street Journal and in the New York Times, USA Today, Inc. Magazine, Forbes, and Wired. Corey earned his SAG union card by working 8 days on David Fincher’s Fight Club before starring in commercial campaigns for Fortune 500 companies including American Express, Mitsubishi and Pepsi. His documentary of the same name won 2017 Addy and Hermes awards for branded content. He has spoken at YPO events, business schools, publically traded companies, and annual conferences, and is a frequent speaker, facilitator, and emcee at Conscious Capitalism events around the country.

Raised as an only son in a Jewish household, was showered with attention and convinced that he was the star of the world.
At the age of five, his mother was diagnosed with depression which completely destroyed his peaceful world. He quickly learned how to how to read the energy of a room and take cues from those around him, sparking his career as a performer.
Discovered choir and theater during high school and felt that this was his identity.
Studied theater in university then went out to LA to pursue a career in acting.
Got pulled into the commercial world and although he was making decent money, hated the fact that he was using his skills to convince kids to do stupid things.
A passion to do something with more purpose began to build up so he got a group of expert actors and professionals together and took them all up to Mammoth, California for a week to learn all aspects of storytelling. At the end of the week, they had some high-quality film scripts.
Created a filming company and, using the film scripts they had created, made a short, high-quality film.
When that business died, created another similar one that also didn’t last long.
Jumped on Craigslist and started doing some writing. Realized that there were lots of people looking for writers and lots of writers looking for work but no proper go-between.
Opened a book writing company, Round Table Companies (RTC), which eventually started attracting coaches and consultants who wanted someone to write their stories and legacies.
Became fascinated by the coaching world and began involving himself in personal development.
Got invited to the Conscious Capitalism CEO summit in 2014 where he recognized that he could integrate the performer he once was with the businessman he now was, to help CEOs express themselves.
Today Corey still focuses about 50% of his business on building legacy pieces for people. In addition, he has also started focusing on the vulnerability people experienced when sharing their stories. This led him to create the law of vulnerability – this uses artistic representations to help people covert vulnerability and the things they feel bad about into something beautiful.

The truth is like castor oil. It’s bitter, hard to swallow and people don’t want it. So we open their mouths with laughter and then we pour it in. -Harold Clurman

For Part 2 of this episode, where you can hear about boundaries in the workplace, plus Corey’s struggle and breakthrough will be live Thursday 21st February at estierand.com/50-2