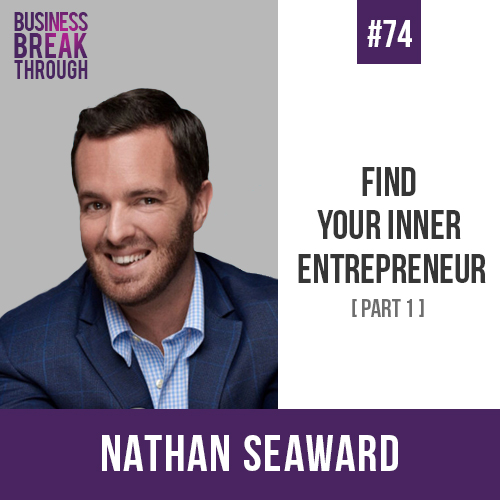 Growing up, Nathan Seaward not only wanted to be a pilot, but he probably wanted to be an actual airplane! Nathan dedicated the first half of his life to his pilot career, but a deep inner sense that he had more to give to the world led him away from his stable job, and into a successful coaching career.

In this episode, Nathan and Estie go deep into the coaching and consulting industry, exploring everything from how to set up an online coaching course, to the lazy entrepreneur and the what-if-positive mindset. Tune in for a fun episode packed with jokes, quips and of course incredible value.

Nathan Seaward’s self-discovery took him from pilot to coach and now teaches his clients to do the same.

Nathan Seaward enjoyed a successful 16-year career as an airline pilot before becoming a personal coach and host of The Nathan Seaward Show. He believes, through the process of self discovery and self mastery, entrepreneurs can change the world whilst creating extraordinary lives for themselves and their families.

He supports entrepreneurs to create game changing businesses that help people and the planet in new and innovative ways. From being a successful entrepreneur in the food industry, to leaving at the height of his piloting career to serve others, he’s always lived at the edge of his comfort zone, taking on new and challenging things in service of being his best self and serving the world.

[08:15]: I call it EBS. I think something that a lot of entrepreneurs suffer from is called Entrepreneurial Boredom Syndrome. The fun part is the building. Once it starts working, it’s not so fun anymore.

[08:42]: An expert in the food industry we managed to get in touch with said, it’s a third-third-third model. Really simply, you should have a third of your costs as your food acquisition, a third should be all your other costs and then a third should be profit. So, if you’re buying a piece of fish, it should cost you $1, your fixed costs should be $1 and then you should make $1 profit. So you should sell it for $3. And we were selling it for $2.20, and we were the most expensive in the city.

[14:22]: We did a lot of cargo, flying cargo airplanes. And so we would start work at 8 pm and finish at 5 am. We’d go down to Asia, and then come back to Japan. And it was brutal. You know, doing it three nights a week. There’s a ton of reasons why I got out of flying, but that was probably one of the biggest ones. I just saw the impact it was having on my health, just not being able to catch up on sleep. Not being able to recover is really tough.

[22:17]: And I was like, “Wow, I’ve had to never network before.” You know, as a pilot, there’s no need to network to find a bunch of flight attendants or network to find, you know, to find the air traffic controller. So it’s like, “Man, this, this is the new skill for me.” And sales. I’ve never sold anything before. It’s taken me five years just to become comfortable with asking somebody for money.

[35:32]: I call them “What if positive.” What if you try this business and what if you meet the woman of your dreams in the pursuit of this business? Will that make it worth it? What if you leave your job and then start growing this business, and it takes you into a whole different industry that you never thought and there is 10 times as much profit available than you ever imagined when you first started?

[47:19]: So I’m a lazy entrepreneur. Whatever Gary Vee says, I sort of do the opposite. I’m like, don’t work before you’re living, take Mondays off….

For Part 2 of this episode, where you can hear more about Nathan’s approach to life coaching, go to estierand.com/74-2.