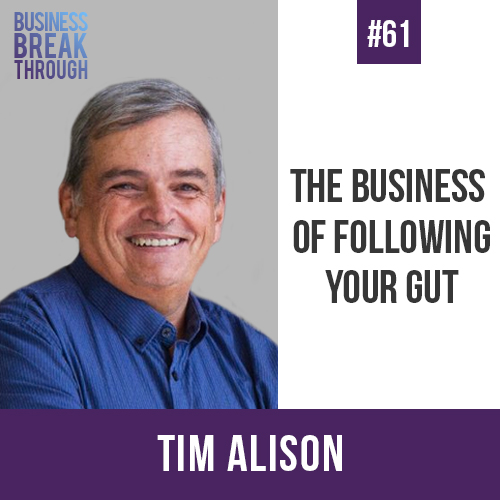 Almost every small business owner has their version of the story. The friend, colleague, relative or coach who was convinced that their business was a non-starter. Yet, time and again these naysayers are proven wrong by those who have the confidence and determination to build their business as they knew is right.
In this episode, Tim Alison, host of Screw the Naysayers Podcast, shares his powerful story of leaving his six-figure income to start his own company as well as some top tips on how to build up the confidence to keep going when everyone else thinks you are crazy.

Tim Alison walked away from a six-figure income and moved to a tiny fishing village in Nova Scotia, Canada, where he started his own company. Everybody laughed at him and told him that he was being ridiculous. However, they stop laughing when his sales topped 10 million.
Today, Tim is the host of the Screw the Naysayers Podcast. His most recent claim to fame is that for his hundredth episode, he had Seth Godin on his show.

[3:18]– Tim: But actually, I was in the top 2% of wage earners in the country. And I don’t say that to boast. But to just, you know, it is hard to walk away from something like that. But I didn’t feel purpose in what I was doing. I felt like, and I knew that I was being a lousy husband, and even worse parent.
[5:44]– Estie: I get it, you’re there, you’re struggling, you get this kind of download, you feel like okay, I’m going to be dead or worse. Yeah. And I do think there’s worse than death. Death, I think is not so bad.
[7:06]– Tim: The World Wide Web did not exist. You know, the, my first computer? Of course, we didn’t have any hard drives or anything, you had to run everything off floppy disk cats.
[12:36]– Tim: So instead of spending millions and millions of dollars, I think I spent invested $25,000 and, all of a sudden, we had a total state of the art product, the only one in the world with Canadian content in it.
[18:42]– Tim: The deal was that if you pay to get to Nova Scotia, I’ll pay for two nights in this really high-class resort, I’ll provide your meals, the entertainment disposal program.
[30:50]– Tim: The other thing that I don’t like about word freedom is, you know, let’s get honest about this thing. I mean, do we want to be free from obligations to our family? Do we want to be free from obligations to our community? Do we want to be free from obligations to make the world a better place? I don’t.
[32:17]: Estie: I’d love to spend a couple minutes on eye on that financial business literacy because I think it is so important. So many people struggle in their businesses, just because they don’t understand numbers. You know, the numbers don’t lie.
[50:18]: Estie: I’m going to show you a really simple scale. This actually works amazing as a mastermind or a group coaching program. They say that in group coaching, people benefit, in some ways more than one-on-one, because they hear the questions from other people that didn’t realize they had and wouldn’t have thought to ask, but, they needed that answer.