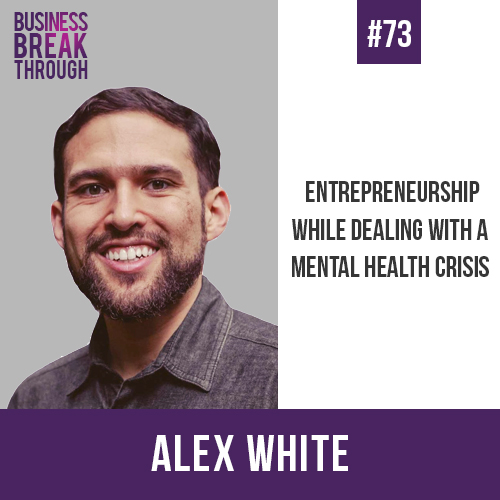 Sometimes the conscience is just too strong to ignore. For Alex M. White it was seeing little school children holding hands while wearing gas masks after the Paradise Campfires in November 2018. Alex left his job at Google Glass and, with zero business experience and no bank account holding a financial safety net, opened Roots & Resolve, a coaching and consulting organization.

In this episode, Alex uncovers how he had the courage to take the plunge into the business world and shares some tips for future business owners on how to face the entrepreneurship challenge. But the crux of this episode comes at the end when Alex describes his struggle with suicidal depression. Join us for a powerful episode that will leave you inspired by the hidden struggles and the power of courage.

Alex M. White is the founder of Roots & Resolve, a coaching and consulting organization dedicated to cultivating more resilient people, projects, and populations. Inspired by his own personal experiences of being faced with uncertainty, fear, and hopelessness, Alex has learned about what it means to cultivate courage in difficult times.

As with many people of his generation, much of Alex’s life has been directly impacted by living with climate change. From evacuating his family away from devastating wildfires to experiencing Hurricane Sandy, Alex is a committed climate reality advocate and seeks to build a diverse, equitable, and inclusive climate movement. Among other deeply difficult challenges, one particular experience served as a catalyst for his work; Alex’s wife, Lauren, was diagnosed with cancer at 26 years old and given just three months to live in 2013. He is thrilled to say that Lauren is now cancer-free, and living life to the fullest.

[9:29]: And I’ll never forget this image of driving to work and seeing school children holding hands with gas masks on, it was a scene out of an apocalyptic film. And I went into work… literally seeing the world on fire around me, and then going in and we were talking about buttons for Real Estate Software.

[19:50]: Toothpaste solved the problem people didn’t really realize they had. They were losing their teeth because they weren’t brushing them and keeping them clean and keeping them healthy, but it was not a thing… And the genius marketer who anchored people on it, and put baking soda in the toothpaste so you’d feel a tingle and say, hey, if you feel that tingle, if you feel that feeling, your mouth is dirty.

[35:43]: Peanut butter and jelly, like that’s reliable. Marshmallows and chocolate, that’s really like a good one. And then one day, you’re like, I wonder if I could combine like peas and plums, not in baby food, but in my own food. There might be a reason no one’s doing that. It might not taste good.

[40:16]: I had an Adderall crash. And I’ve been navigating the most severe depression of my adult life. And it’s to the point of suicidal level of depressions…. And then at the same time, you know, financially I maxed out two of my credit cards and one of my teachers, someone that I’ve really looked up to, for a long time, a teacher, found out that they had been inappropriate with some students and had also stolen a lot of their content.

[42:57]: The inner critic that goes through your head that’s like a drunken monkey just spitting crap at you on a daily basis of like, wow, you’re worthless, you’re irresponsible, you’re bad at your business, you know, like, you really don’t deserve to live. It has been intense. And I’m really excited talking to you today. Because this has been the first time since May, where I haven’t had self-destructive thoughts for four days in a row. So yeah, it feels like a celebration.

[45:57]: I’d say that when you’re going through this rough patch, just do whatever you can to get out of the house. And just act like, just pretend to be normal, even though you feel super miserable. Just go and pretend to be normal with other people.

Courage is the resolve to do well without the assurance of a happy ending.- Dr. Kate Marvel