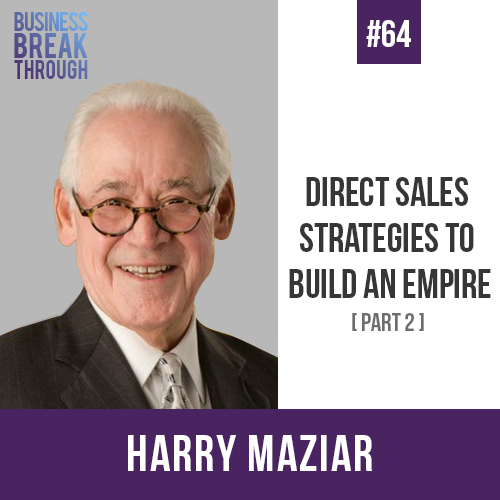 If you love quotes, you’re going to love this episode! Harry Maziar, a seasoned sales expert, shares with us how he built up empires not only using sales strategies, but also an awful lot of straight forward common sense.

But this is not just another episode on how to sell. Tune in for an episode peppered with genius quotes, some humorous, some discerning and some that will stick with you as you go about your day.

Harry Maziar (pronounced like “Frasier”) is an author and philanthropist whose career has combined family, business, and community. He served as President of Zep Manufacturing Company, a division of National Service Industries, for 27 years. During his tenure, Zep became an international leader in the specialty chemical industry. As a sales representative, Maziar was so successful he was named the company’s first director of sales and he led 2,000 salespeople who produced double-digit growth for 25 straight years.

Maziar retired as Chairman of the Chemical Division of National Service, then a publicly traded NYSE company. Maziar jokes that he has failed retirement as he has busied himself with both for-profit and non-profit endeavors. He serves on various business and community boards, and has been active in a variety of philanthropic and social programs, including Junior Achievement of Atlanta, the Atlanta Humane Society, United Way of Metro Atlanta, and Kennesaw State University, where he continues to serve as the first Executive in Residence of the Coles College of Business.

One of his proudest achievements in retirement has been completion of his book Story Selling: Sage Advice and Common Sense About Sales and Success. A passion project aligned with Harry’s mission of inspiring and empowering anyone to pursue their purpose in life (and succeed while doing it). Articles by and about Maziar have appeared in the Atlanta Business Chronicle, and he has been featured on Delta Air Lines’ “Flight Talk.” Maziar earned a BBA degree from Georgia State University. Above all, Mr. Maziar and his wife, Sherry, treasure their family. Their three children and eight grandchildren have brought them unparalleled blessings and joy.

[7:59] Sales people are not born. You don’t pick up birth announcements and see “Born today a salesperson”
[11:49] Estie: Where do you draw the line between persistent and harassment?
Harry: Oh, it’s a very good question. And again, there’s not a hard and fast rule. You have to listen. If you sense that the prospect or the customer is impatient is saying that’s enough, whether he says it directly or not, then you know, it’s time to fold your book and say, “Look, I’ll be back in 30 days, I want to bring this to your attention. In the meantime, we’ll leave you this little brochure, or you’ll send a follow-up note or email. Let them know it’s not over, it just wasn’t now.
[18:33] Each letter ended with a little box at the end with a Harry’s hint, tagline. And in it was a little adage a little saying, some I would make up, some I stole off of church bulletin boards. Little catchy phrases, like “Selling is a trick but it isn’t trickery” or like, “The safest gamble of all is to take a chance on yourself” or “fight truth-decay”, or “When you put a limit on what you will do, you put a limit on what you can do” and “the only thing to try when all else fails, is try again”
[30:13]: You need to make sure you communicate with them. Morning, noon, and night, whether it be emails, whether it be letters, whether it be Twitter, I don’t care what you’ve got to stay in front of your reps. You’ve got to be accessible. So many people build barriers that shouldn’t be built.
[33:01] Estie: What should someone look for when they’re hiring?

Harry: Well, I like competitiveness, what did that person done before? What? Did they play high school or college athletics, where they Cub Scouts and Boy Scouts and Girl Scouts and where they Eagle Scout? Is there some success in their background that shows stick-to-it-ness? Does it show resolve?

Success is a journey, not a destination.
Easy Street is a blind alley.

For Part 1 of this episode, where you can hear Harry’s incredible journey to the top of large companies, go to estierand.com/64-1.