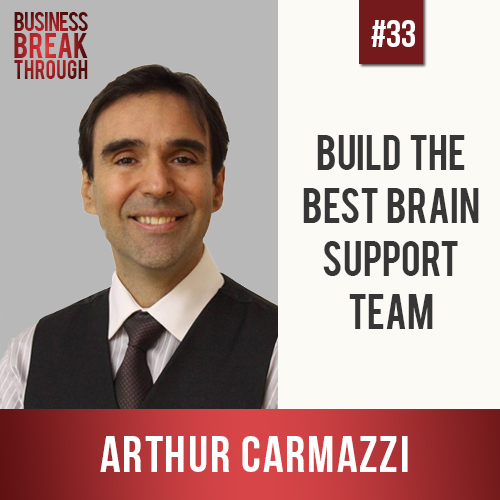 This recording was life changing for me! When Arthur told me that I have a Chaotic Brain, I was initially shocked but have since changed the way I look at myself, my staff, my family and the world. Arthur Carmazzi is one of the world’s top leadership gurus and the founder of DC Psychology, without any psychology degree! In this episode, Arthur reveals the inner workings of the brain and how different types of people process information. It’s a game-changer in how you build your team. Arthur also shares his struggle having been a jet-set large-stage speaker for many years, he’s trying to restructure his business and reduce travel time to spend more time with his family.

Arthur Carmazzi is a best-selling author and currently ranked as one of the world’s top ten thought leaders in organizational culture. He has developed an educational system that has no teachers and has developed leaders around the world through today’s state of technology. He is the founder of Directive Communication Psychology, the science of group dynamics – how people react and interact with each other. One of his most popular resources is The Colored Brain Model, which explains how brains genetically get clarity. On the side, he developed and built a resort in Bali, Indonesia, that is carved into a volcanic stone mountain.

After being assigned to the “dumb class” at elementary school, was encouraged by a teacher to realize that he was not actually dumb.
Got taught that telling the truth really sucks after a story involving driving without a license and an overnight stint in jail.
“Worked” as a criminal for 9 years.
Travelled to Puerto Rico where he was stabbed and nearly died.
After a miraculous recovery, sold everything and started travelling the world.
Ended up in Asia where he persuaded a company to hire him as managing director of an international expansion program.
When he got caught up in the company’s culture of blame, started doing research into psychology to fix the problem.
Ended up saving $17,000 a week in wastage for the company.
Borrowed half a million dollars to open his own franchise which ultimately failed – landing him in huge amount of debt.
Got job in big multinational company to pay off his debt.
Opened his own company as a leadership expert.

When hiring people, you pay them to achieve at their potential. But, if the organizational structure doesn’t support them, they end up under-achieving and you are wasting money on their salary. People have a passion to achieve great things. When you kill passion, you kill innovation and trust, and you end up with people who wait for your instructions.
How to build leaders inside small businesses:
1. Don’t look for people with the same brain processes as you. Look for diversity of brain processes to fill in your gaps in capability (see the different types of brain processes below).
2. For a high performing team, make sure that everyone in your company has at least one common primary emotional driver or motivator.
The Colored Brain Model:
There are four different types of processes  for how your brain gains clarity:

Arthur used to do a lot of keynote speaking and he used to get paid a lot for it, but now he has cut back and stopped travelling because he wants to spend more time with his family.

Arthur has found two other ways to keep his business thriving without having to travel:
Arthur has also built up a team made up of all the different types of thinkers so that they can make his business ideas move without him having to implement them.

“Leadership does not come from getting people to follow you. It comes from creating an environment where people are inspired to achieve the company objectives, in the process of achieving their own objectives”